>So, I thought I would try joining in on this silly thing and begin with my new life and some pictures of the start of my journey.

My first stop was with my friend Tina and this is what it looked like from her balcony. 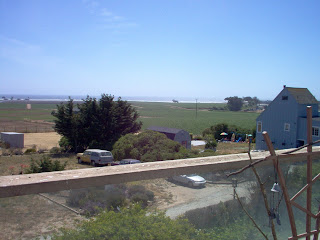 Most lovely farmlands right outside her balcony and way off in the distance is the ocean!

We went the next day to see this really remarkable cemetery (ok, I do admit to this real love of cool old cemeteries) But, just look at these pictures and you will understand why it was so cool!! 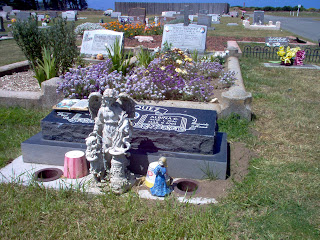 They decorate these things with all sorts of ornaments, plant gardens on them, etc. They have literally made these really cool shrine/homes for their departed friends and loved ones. 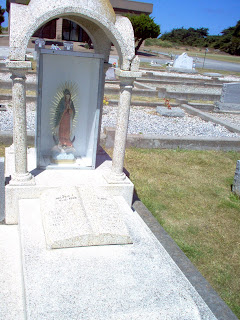 This was a most unusual one! The Madonna here is on a black crescent moon. So far, I haven’t found anyone that can explain what this signifies.

I wonder sometimes what made you what you are, what dreams you may have had, what fires may once have burned within your chest. Was there once a time when the fires burned as greatly and brightly as they do in me. Did you once look to the skies to soar with the hawks, roam the plains with the lions and roar, or sit under the full moon with the wolves and howl? Was there once a time when someone clipped those wings for flight that you had, or did you do this to yourself?

Did you hear the song of the wild in your spirit, feel yourself drawn to its beckoning, and silence it, blocking your ears from hearing that hypnotic song? Did you turn your back upon it so utterly and completely that it would never again be heard? But, you were wrong, were you not? That song still calls you, still beckons you. Is this what has created the bitterness in your soul? Is this what has made you turn from what life could have held for you and caused you to imprison yourself in loneliness and hatred?

Did you seek instead to form yourself into a creature that could be accepted, could find power in holding judgement over others for having the daring that you lacked? Is this why you found in me such a seed of wrong? Is this why you turned your heart from me?

You were once given a gift of brightness. A creature born of the wild who could hear that song in every blade of grass, in every wind that stirred upon the air. You were given one that was not afraid of the song, but joined in. Her wings you tried to clip many times, but each time they seemed to grow back. You tried to cage her body and smother her spirit, yet it blossomed even in the height of your attempts. And when it became obvious that all your plans had failed, all your attempts futile, you turned on her and called her evil.

Many years have passed, her wings broken many times and healed again. Her flights have often been staggered and weak from the misuse, but her spirit has never broken. She flies still, and still she hears the song that sings to her spirit, and she listens to it. But, there is still a moment every now and then that she stops in her flight and a tear falls from her eye for the mother that should be standing below rejoicing in her child’s flight. A tinge of sadness that there is not one there that is willing to share with her that this spirit of the wild was a gift from one that was maybe just afraid to try those wings on her own.

And so, as she has always done, she must fly alone.